We want to help spread awareness of like-minded projects that foster repair, reuse, consumer empowerment, and community building throughout the world. So we’re highlighting these “kindred spirits” in a series of posts on “Repair Elsewhere.” Look for other posts in the series within the “Repair” category in our post archives or by entering “repair elsewhere” in the site search bar.

The Austrian city of Graz just became one of our favorite places in the world! Why, you ask? Because residents of Graz are actually paid to repair their electronic devices rather than replace them.  According to a May 5, 2018 report on the RREUSE web site,

“The Austrian city of Graz has become a non-proclaimed European capital of repair following the introduction of a new funding programme encouraging households to repair rather than replace their electronic devices. Launched in 2017, the scheme gives citizens the opportunity to be reimbursed for up to 50% of repair costs amounting to a maximum of 100 EUR per year. In its first year of operation over 160 households benefitted from this ‘repair bonus,’ with over 90 claims having been registered in the first two months of 2018, indicating a significant rise in interest. The reimbursements apply exclusively to repairs of electrical devices carried out by authorised services registered in the ‘Austrian Repair Guide.'” As of the date this post was written, 100 Euros equal $117.35 (USD).

The City of Graz Department of Environment manages this repair incentive program, recognizing the fact that buying a new device is often cheaper than paying to repair a device already owned. This reality of course creates an economic incentive to discard electronics and appliances before the products have ceased being useful–resulting in more material entering waste streams, and more resources being invested in the manufacture of new products than might otherwise be the case.

The article further points out “In addition to the repair bonus, Graz has also introduced a parallel funding instrument of up to 1200 EUR per year which is available for non-commercial repair initiatives such as repair cafes in order to cover cost of operation, consumables or public relations activities.” Again, as of the date of writing this post, 1200 Euros equals $1404.18 (USD).

We wish there was a similar scheme to incentivize repair, and to support non-commercial repair initiatives (like the Illini Gadget Garage) here in Illinois, or anywhere in the US for that matter!

We applaud the Graz Department of Environment for recognizing the economic barrier to repair and taken action accordingly. If repair cost (or perception of how much repair might cost) is making you to consider replacing an electronic device or small appliance, consider coming in to the Illini Gadget Garage. We’ll guide you through troubleshooting the problem, and repairing the item yourself, if you’re open to that. The cost of a new part is often so much cheaper than buying a new device, especially if you’re willing to do the labor yourself. If you don’t have the time to try our collaborative repair approach, if repairs required are complex, or if you ultimately decide not to give the “do-it-together” route a try, we can help you research local repair options (though we cannot refer you to specific shops and do not endorse any particular businesses). We’ll help you identify shops that work on the type of device you need assistance with, so you can call them to ask about costs, check out online reviews, etc. We’re here to help you become more educated about repair and more comfortable with considering repair before you make any decisions about recycling, donating, or throwing away a device. Note that we can help you find local recycling and donation options too, if that’s needed.

We’re not likely to open a branch of the Illini Gadget Garage in Austria any time soon, but if you’re interested in making a donation to support our free-to-public collaborative repair services, see the “Donate Form” page for more information (and thank you!).

Tomorrow, Thursday June 14, come to the Champaign Public Library from 1-3 PM for assistance with troubleshooting or repairing your electronic devices. Staff will be set up in the Busey Bank Conference room on the library’s second floor. Feel free to stop by even if you just have questions, or if you want to schedule an appointment to come into our campus workshop at a later date to work on your device.

See the Facebook event for details. We’ll be at the CPL once a month during the summer for pop-ups. For additional information on pop-ups, see our Facebook page or our Upcoming Events page. 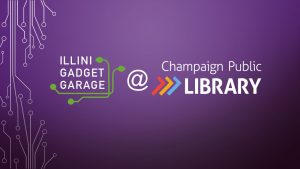 Join the Illini Gadget Garage at the Champaign Public Library (Foundation meeting room, 2nd floor) this Saturday, June 9th from 1:30-3:30 PM to learn how to bring new life into old electronics just with a bit of cleaning and TLC. A short presentation will demonstrate some of the simple ways that cleaning your devices can keep them functioning well and in use longer. After the presentation, there will be a workshop session where you can try out some of your newly learned cleaning processes on devices that you bring in. The Illini Gadget Garage staff will provide some useful household cleaning products to help scrub up those dingy devices. 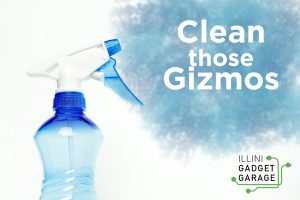 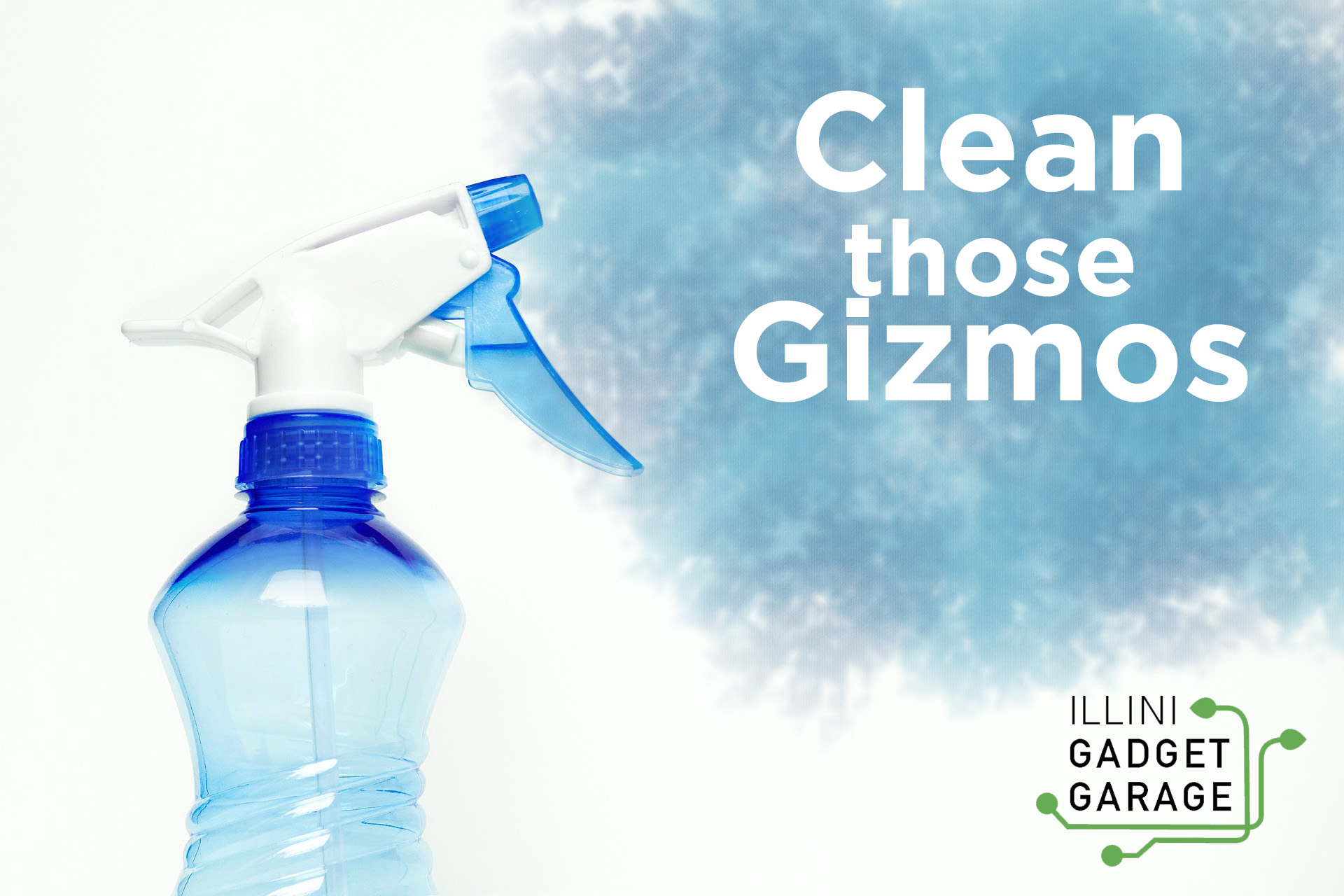 Join the Illini Gadget Garage at Champaign Public Library (Friends meeting room, 2nd floor) on Saturday, May 19 from 1:30 to 3:30 to learn how to bring new life into old electronics just with a bit of cleaning and TLC. A short presentation will demonstrate some of the simple ways that cleaning your devices can keep them functioning well and in use longer. After the presentation, we will have a workshop session where we can try out some of our newly learned cleaning processes on devices that you bring in. We will provide some useful household cleaning products to help scrub up those dingy devices.

Can’t make it? We will be presenting this again on June 9th. Check back for more details. 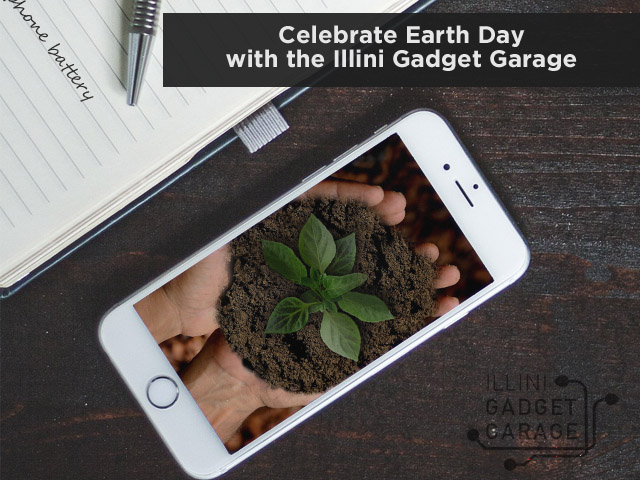 The most sustainable device you will ever own is the one you currently have.

Learn what you and others can do to help keep your devices working by learning to troubleshoot and repair them. Yes, YOU can do it. No, you don’t need experience, we’re here to help walk you through the troubleshooting process to figure out what’s wrong, what parts might need to be replaced, and how to replace them. If you can solve puzzles and read recipes, then you’re about 80 percent of the way ready to jump into repairing a phone or a laptop. The other 20 percent is a combination of patience, practice, and a willingness to learn.

At the Gadget Garage, we want to keep as many devices out of landfills as we can and that all starts with YOU.

Find us at the Champaign Public Library (Friends meeting room, second floor) on Saturday, April 21st from 1:30-4:00 PM for our (day-early) Earth Day event. Find out more from us about: battery, CD/DVD, and CD case recycling; where to take working electronics you no longer want; where to recycle non-functioning electronics in the CU area; where to find local repair shops for those of you who do not want to work on your own devices; etc. We have a lot of information to offer! Stop in and help us help the Earth.

And help you of course.

Because you love it when technology works like it’s supposed to. We all do. 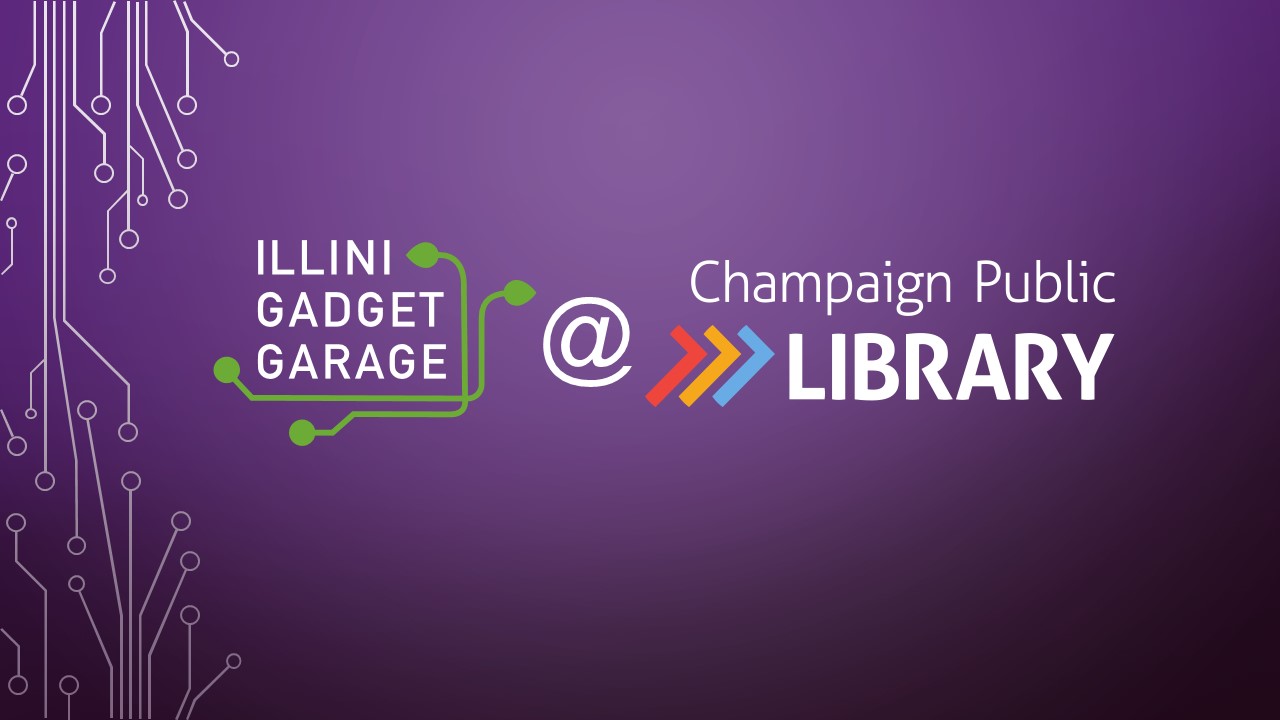 Have broken gadgets or questions about what we do? Find us in the Champaign Public Library’s Library Friends Conference Room this Saturday, March 10th from 1-3. If you have items you are interested in repairing, we encourage you to email us about the items ahead of time, so that we can do some preliminary research and can accommodate the time and tool constraints needed for the repair. Contact us at: illiniGadgetGarage@gmail.com

Thanks to Urbana Public Television (UPTV6) for visiting the Illini Gadget Garage recently and featuring us in the February 2018 edition of “It’s All About U,” a program that highlights events, services, and programs in the City of Urbana, IL. Host Natalie Kenny Marquez spoke to project coordinator and sustainability specialist from the Illinois Sustainable Technology Center (ISTC), Joy Scrogum, and IGG staff members Madeleine Wolske and Amanda Elzbieciak. If you’re just learning about our project, haven’t had a chance to visit our workshop, or would like some ideas for how to get involved, check out the video clip below. (Note the bit on the IGG starts at 8:59.)

This semester we will be focusing on pop-ups in and around the community to bring collaborative repair to you. Keep an eye on our social media pages, like Facebook and Twitter, to find out where we’ll be next. Due to limited staff and funding we have decided to scale back a bit and will not be holding open hours at our main location, but we are still here to assist you! We will be setting up appointments for those who cannot make it to pop-ups, or who need additional time to continue repairs started during pop-up events. Feel free to contact us via email or Facebook if you have any questions or would like to schedule an appointment with us. Also, if you like what we do, you can help support us by visiting http://wp.istc.illinois.edu/ilgadgetgarage/donate/donation-form/ .

Wishing you all Happy Holidays and a wonderful New Year! We will be closed for the remainder of 2017, follow us for updates on our schedule next year! 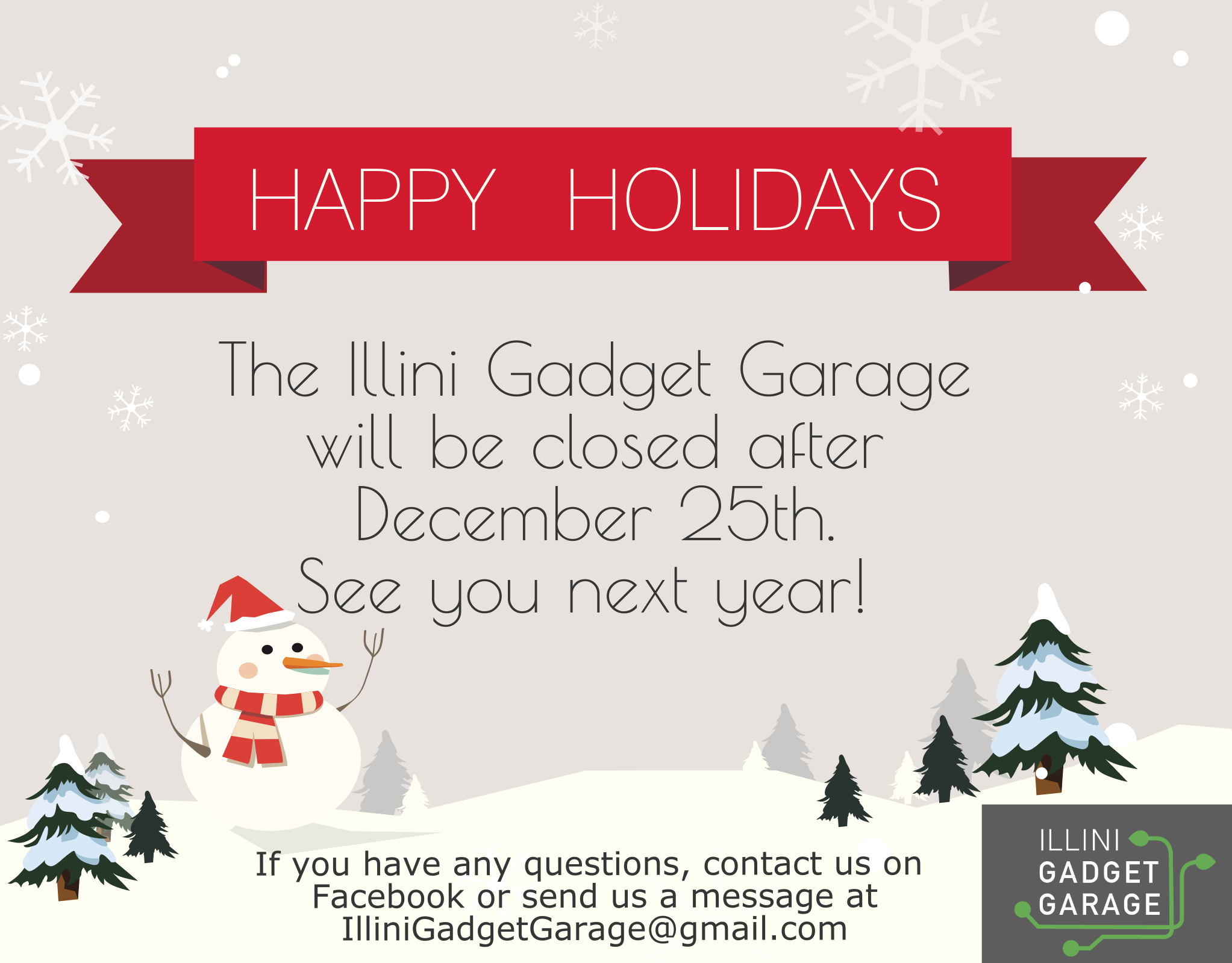 Join the IGG staff this coming Sunday, December 10th, from 1:00-3:00pm for an afternoon of festive repair! Bring in your broken holiday lights and we will help you repair them. After your repair, enjoy some hot chocolate or tea and create a card out of recycled electronics.  This event is free, but we will be accepting a suggested donation of $5 to help defray the costs of running the Illini Gadget Garage. For more information on how to donate, follow this link to our online form. 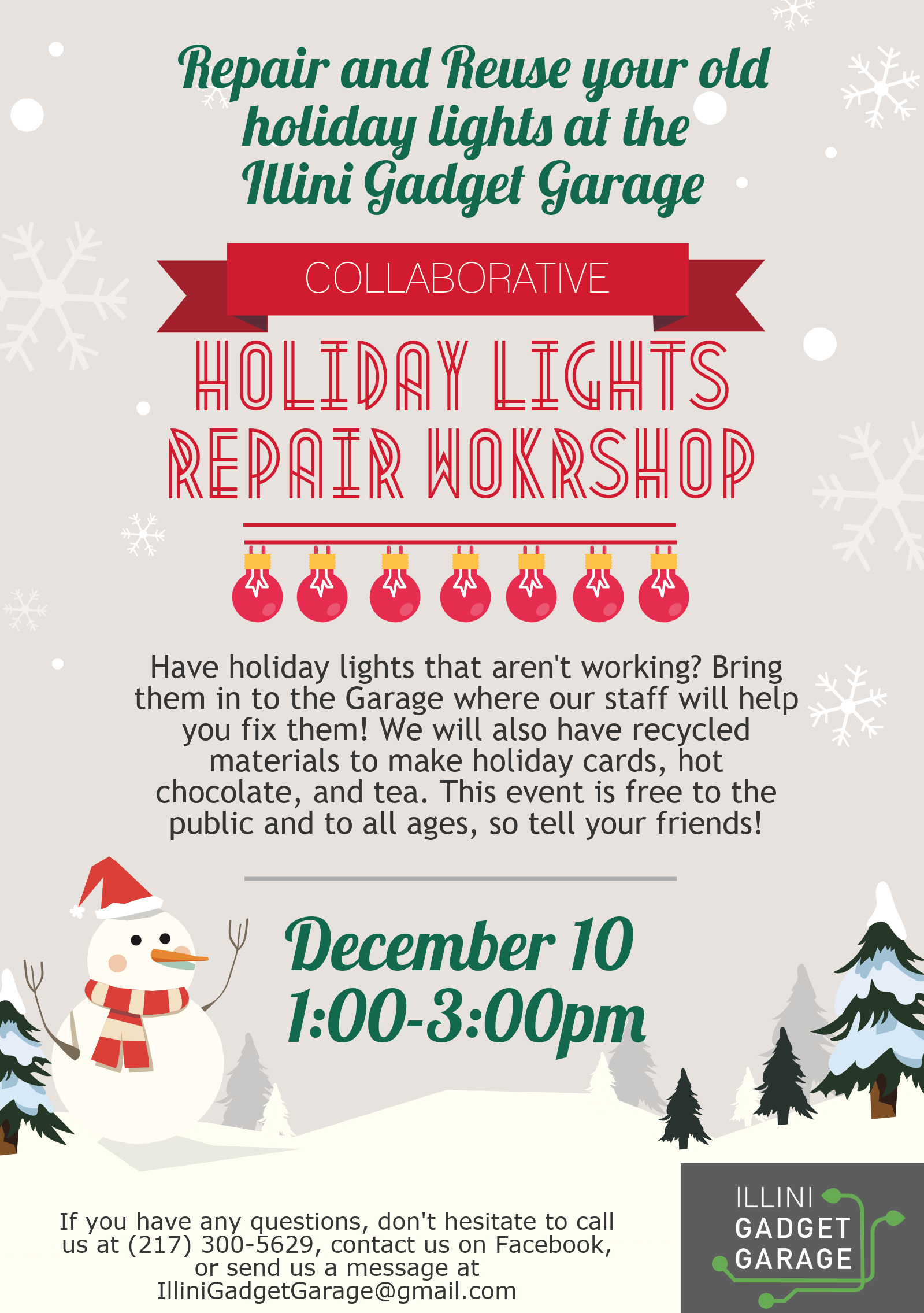